Santa. He’s magical, larger-than-life, and full of the best Christmas cheer. And guess what? I know him quite well!

Hello again ladies and gents, I’m Sparkle the Elf! And yes, I am back in North Florida for one more quick visit before the holidays get craaaaazy. Being Santa’s friend and N.O.E. (Number One Elf) means I get all kinds of questions throughout the year.

For example, a lot of kids want to know “How does Santa know exactly what I want” or “How many puppies does Santa bring on Christmas?” (You’d be surprised at the answer, but if I told you he’d have to demote me from N.O.E to checking the naughty list!)

Without a doubt, the question I get the most is, “How does Santa deliver all the gifts in one night?” Well, like before I can’t tell you which of these following theories is true because that would ruin the magic (and I’d lose my number one spot) but here are the most common explanations.

Scientists have long studied the dynamics of how Santa’s sleigh is able to visit the entire globe in a single evening. They’ve determined that due to:

Santa has roughly 42 hours in which to deliver toys to half a billion households. Whew, I’m tired just thinking about it!

Scientifically speaking, this allows him 300 microseconds per home. Sounds impossible, doesn’t it? Maybe, but that’s only about 1% of the speed of light so anything is possible.

Realistically though, if it takes him 30 seconds per home (which sounds more doable), he’d only be able to visit about 5,040 homes on Christmas Eve. Maybe scientists aren’t as smart as they think they are… 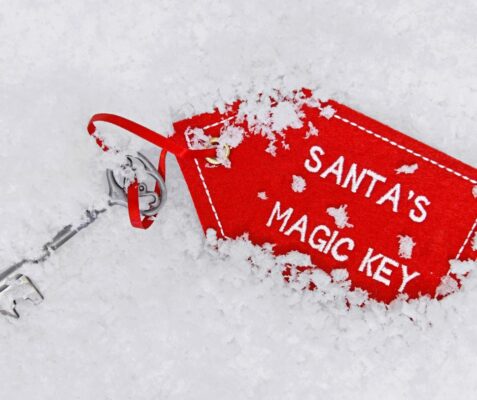 …because I tend to like the magic answer. You just have to believe! All of that collective belief is what lifts the sleigh and zooms Santa all over the Northern and Southern Hemisphere in record time. Santa’s reindeer aren’t like typical reindeer. They are a special breed, born only at the North Pole and fed a steady diet of candy canes and magic carrots to prepare them for their job of transporting toys to boys and girls everywhere.

Here’s something you might not have known before today: the magic at the North Pole is so unique that you can feel it in the air! It is everywhere you go and around every corner. Magic helps us elves create the toys every child dreams of and helps Santa make the naughty and nice list along with keeping us all full of endless hot cocoa. Whoops, I think I may have given away too many secrets here.

So for those who can’t quite get behind the scientific answer, they tend to lean on the magic answer. And the more you think about the idea of magic and Christmas, well it might just start to make a little bit more sense.

Speaking of sense, there is also The Common Sense Answer. And yes, I capitalized that for all of the deep thinkers out there!

So, for those of you unable to wrap your head around the mind-boggling scientific description and those of you scoffing at magic (we are going to need to have a talk after this if so), there is an easy explanation.

The thought process goes something like this: One person, 9 reindeer, a sleigh, and billions of presents can’t possibly make it to every house in one night, right?

So, Santa has clones or twins or other helpers that help him complete his magical journey within a single night. This theory relies on the belief that Santa has an expansive team in each time zone, with a command center and friends that help him hit every house in time.

As is true at the North Pole, many hands make light work, so this scenario kinda makes sense. 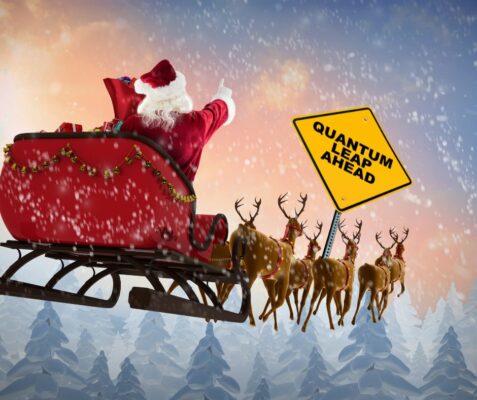 This is possibly the most fun explanation on our list because it transcends our reality. Marvel may be onto something with their “Quantum Realm” theory. If you’ve ever seen the movies Ant-Man or Avengers: Endgame, you may remember how our heroes traveled through time through what they called “The Quantum Realm.”

Some believe Santa is the one who discovered this phenomenon and that Iron Man stole Santa’s notes. You gotta admit, Tony stealing Santa’s notes would explain how they were able to use it so easily at will in that movie simply by punching a hole through time and space.

And you know, this certainly does explain how Santa is able to move so quickly and manages to sample cookies, drink a little milk, and visit your home with not a sound. Who knows, maybe Ant-Man and Santa will meet up for some cocoa one of these days (perhaps even in the upcoming film Quantumania — did I say too much?)

I promised not to give away any secrets here but the team at Twinkle Nights is pretty magical if you haven’t already noticed. Who else could design and install the most beautiful lighting displays you’re bound to see this season?

I’ve heard through the grapevine that they may even be Santa’s delivery assistants, with their displays lighting the way for Santa on Christmas Eve. And of course, you know they always have a special surprise up their sleeves thanks to their elf friends like me!

Whatever the reason, Twinkle Nights is here for all your holiday needs

If you’re still thinking about decking the halls and lighting up the night so Santa can find your home on Christmas Eve, call the team at Twinkle Nights as soon as possible! They’ll be certain to give you a Christmas lights display worthy of the Big Guy himself!

Now, I better get back to the North Pole before Santa notices I’m gone or I’ll be on reindeer clean-up duty for a week. Bye for now, friends

The Best Christmas Party Ever – How To Prepare!